When I was a kid, the comics page was my entry point into being a newspaper reader. There was a mini-renaissance going on thanks to The Far Side, Calvin & Hobbes and Bloom County. Plus, Garfield was still in its first decade of lasagna-loving and Monday-hating.

I loved checking out the comics page when I visited other towns. There would be strips we didn’t have in Des Moines, like Hagar The Horrible, Snuffy Smith, Mary Worth and Curtis. Most of them weren’t comics I wanted in my own paper (though it was always interesting to get the history of Kwanza every year in Curtis), but it was fun to get a brief peek into what other communities were reading every morning.

As I grew up, the comics page lost some of its appeal. It was still the first thing I read, but the holy trinity I mentioned earlier had all ended their runs (with Bloom County characters making sporadic returns in Outland and Opus). Peanuts was clearly running on fumes, and as I’ve discovered being unemployed, Mondays aren’t really any different than other days when you don’t have to leave your house. So stop being such a mopey dick, Garfield.

I begged editors to let me attack the comics page with a hatchet several times while I worked at the Register. I never got my chance. See, the comics page is a double-edged sword for the paper. There’s no advertising on it, so it doesn’t really make the paper any money. But if you make a change, people will call and cancel their subscriptions. So the page is more or less frozen in amber unless a syndicate completely stops offering a strip.

That’s how we’ve ended up with comics that are literally unkillable undead monsters, like Peanuts and For Better or For Worse. The strips have ended (in the case of Peanuts, 16 years ago), but they still litter the page, preventing new strips from rising up and taking their place.

It’s like if NBC had just decided in 1998 “We know Seinfeld is ending, but we’re going to keep reruns as part of the Must See Thursday block.” Then in 2004 decided to do the same with Friends. But to make this example really relevant, Caroline in The City, Suddenly Susan and The Single Guy would still be producing new episodes, having passed writing duties down to the children of the original creators.

So what would I cut? I’ll be a realist and say that there are some unfunny strips, like Family Circus, Dennis The Menace and Garfield, that will exist forever. They are the Matlock reruns of the comics page. Every panel is a small death of comedy, but even in this hypothetical situation, I accept that they’re too powerful for me to cut.

Marmaduke also gets a pass. It’s horrible unfunny, but it’s improved immensely when you read it being aware of the theory that Marmaduke’s owner is secretly Hitler.

Also, did you see the strip a few weeks ago where we find out that Marmaduke not only has pets, but one of them is clearly Cthulu? Something weird is going on in this strip, so it stays. 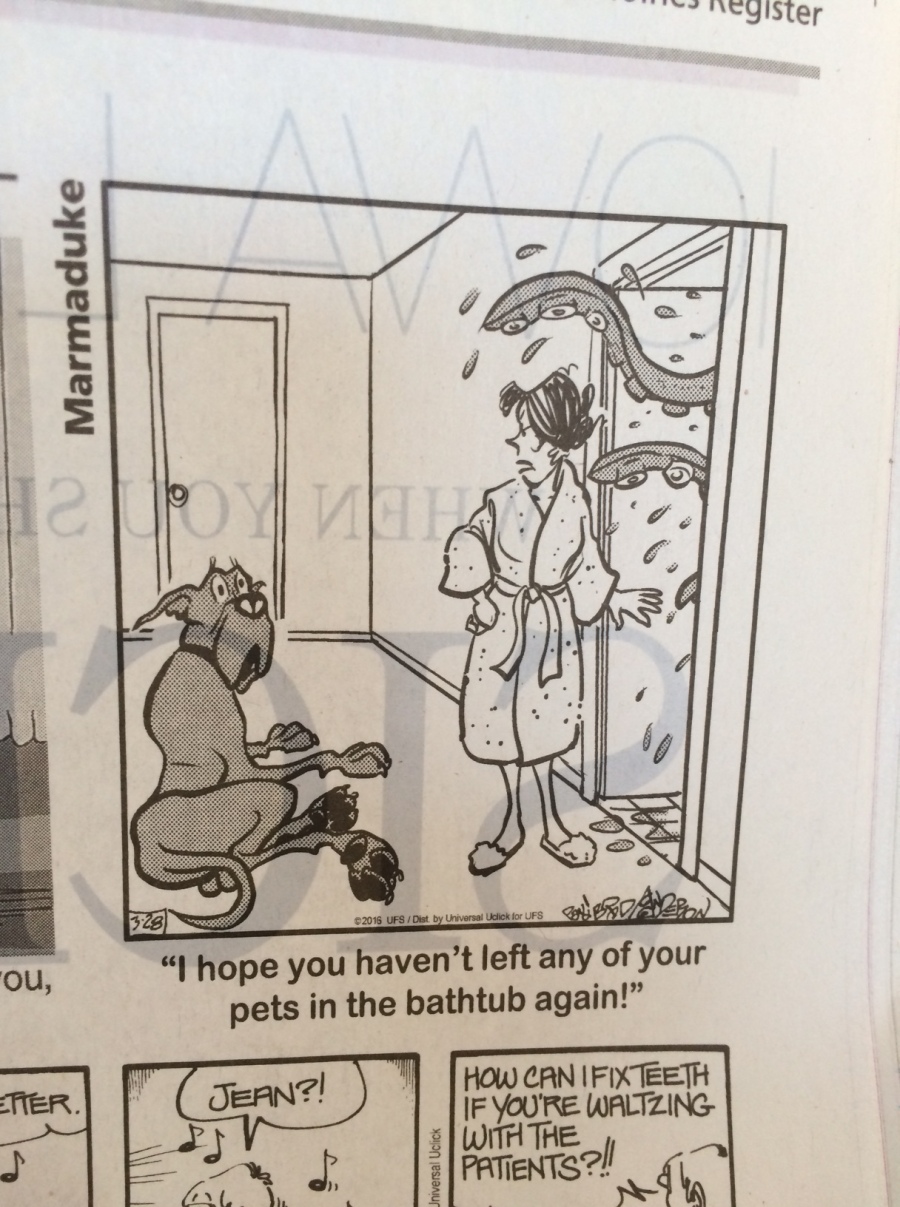 Doonesbury can stick around, if for no other reason than Duke is awesome. I am a little weirded out that the adults seem to have stopped aging, but their kids are still getting older. This strip is going to end up in a weird Gasoline Alley situation eventually (that was another strip I only ever saw on vacation).

Blondie: Really, would you miss it?

Zits: It can stay. It’s felt kind of stale for a while, but compared to most of the page, it’s freshly-baked bread.

Baby Blues: Eh, OK. I get the impression that whoever is writing/drawing it is starting to forget how kids work. A few weeks ago the parents were using their 9-year-old as a babysitter for their 6-year-old and baby. I think they’re trying to get child protective services called on them. I’ll bet they have objections to immunizations as well.

The Duplex: A new strip! This gets to stay just because it’s something new. It recently replaced Luann, which everyone had forgotten was a thing.

Rhymes With Orange & Non Sequitur: I’ll let them stay, but Non Sequitur bugs me when the recurring characters show up. Have you forgotten what “non sequitur” means, Wiley?

Between Friends: I think this is the new Luann. It can stay. For now.

Dilbert: When it’s on, I have no complaints. But is it ever that great? Whatever, unfunny people need to buy coffee mugs and calendars for their cubicle too.

Mother Goose & Grimm: It can stay.

Pickles: I forget if I hate this strip or not. *flips coin* Cut it.

Jump Start: This is the only strip that doesn’t center on white people. Is it funny? Are any of these strips?

Pearls Before Swine: Oh wait, this strip is funny. And it’s buried at the bottom of the page. It stays.

Judge Parker & Rex Morgan: I don’t care what anyone claims, these are the same comic. Everyone looks like they’re from the 1960s, and as far as I can tell, Judge Parker isn’t a character in his own comic. Or maybe it’s Rex Morgan. It’s tough to remember, SINCE THEY’RE THE SAME FREAKING COMIC.

A decade or so back, the Register cut Judge Parker (or maybe Rex Morgan) and people went ape poopie. There were countless phone calls complaining, and thankfully no emails, because people who read Rex Morgan (or maybe Judge Parker) are 4,000 years old and don’t use email. Their only joy in life comes from stories told in two panels a day across decades.

Remember when you were a kid and you might get sucked into a soap opera when you were at home all day for summer break? And you couldn’t stop watching and there was no way they were going to resolve this clone storyline before school starts on August 20 and OH MY GOD, I’LL NEVER GET RESOLUTION!

That’s what reading Rex Parker is like. Even if you keep reading, you’ll never get resolution. You need to stop. Stop reading it. Stop wondering if Judge Morgan’s new case will spice up your morning with intrigue. It won’t.

You know, I feel like that wasn’t the bloodbath I was expecting. For Better or For Worse, Peanuts, Blondie, Pickles, Rex Morgan and Judge Parker were the only cuts. If those are some of your favorites, I apologize. You can read them online. Also, you have horrible taste in comics.

In my next post I’ll come up with some possible replacements.

2 thoughts on “The comics page is a shuffling, humorless corpse that needs to be destroyed”