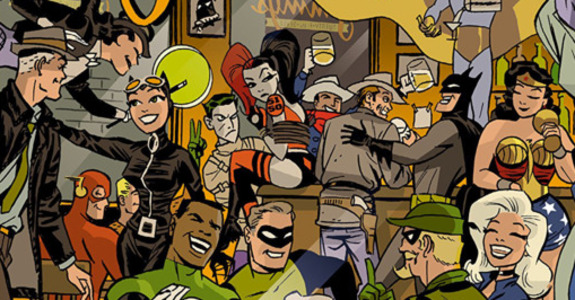 UPDATE: Now I’m seeing that there’s some confusion on if reports of Darwyn’s death were accurate. I hope I posted this about 30 years too soon.

I just woke up with a nasty stomach bug and was flipping through my phone to see on Twitter that cartoonist Darwyn Cook has passed away. His wife just announced yesterday (May 13) that he was battling aggressive cancer.

I met Cooke a few times. The first was at San Diego Comic Con in 2005. He was doing a signing at the DC Comics booth and had to leave to do a panel. There were only about three of us left in line, but he told us he would return after the panel and make sure we got our books signed.

He returned and made good on his promise, plus some. He drew a little Selina Kyle in my hardcover of Selina’s Big Score and drew a breathtaking sketch of Catwoman in my sketchbook.

When I ask a creator for a sketch, they often ask if they can look through my past sketches. People almost always linger on the Cooke sketch. I’ve had pros say they’ve considered running off with my sketchbook because of it. It’s above and beyond what any creator would draw for free for a fan at the busiest con in the world.

I met him again last year at Planet Comic-Com and mentioned the reaction his sketch always gets, thanking him. He was kind of quiet that day, but he drew a little quick head sketch of Parker in my hardcover of his adaptation of Richard Stark’s The Hunter.

Earlier this week, before the cancer news was announced, Comixology started a digital sale on Cooke’s DC work. I recommend it all, especially Catwoman, his entry in the solo anthology and his Batman/The Spirit crossover. I’ve read every one of those books, other than the Before Watchmen material. You can’t go wrong with any of them.

His four Parker graphic novels are also on sale through Comixology, they’ve also been on sale for some time.

Cooke came to comics from animation. He was responsible for the great opening to the Batman Beyond animated series, storyboards on the 90s Batman and Superman animated series and director for the Men in Black series. He used Bruce Timm’s art style as a jumping off point, combining it with he dynamism of Jack Kirby and the slick cool of a 60’s caper flick. If Don Draper was a comic character, he would have been created by Cooke.

I’m thrilled to have met him a few times and to be able to own some great sketches by him.