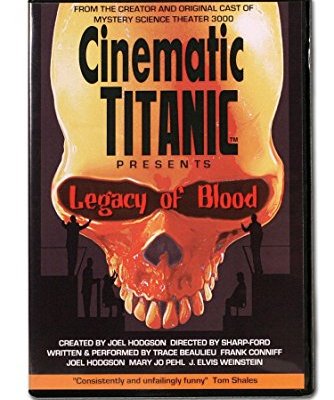 After two episodes with films that had a more traditional MST3K feel, Cinematic Titanic returns to a weird and creepy 70s film similar to its first outing, “The Oozing Skull.” Also like “The Oozing Skull,” “Legacy of Blood” had multiple titles: “Will to Die” and “Blood Legacy.”

The film also starts with a different note than past releases. It seems the Titans were starting to feel more of the pinch of piracy (“The Pinch of Piracy,” NBC’s next Mystery Movie!):

“Cinematic Titanic is proud to present this latest episode of our show. It is written, performed, produced, and financed by us, the people you are about to watch. By buying this show you are helping us continue making more of them and supporting artist driven entertainment. We thank you.

“Unauthorized copying and uploading of this content hurts real people, namely us, not some monolithic faceless corporation – us… your friends.”

Before the film, we get the Titans walking into the studio debating how real the term “electronic scaffolding” sounds. There’s also some discussion on if the group should stay in this setting. Once they decide to stay, one of the scientists leading them gives the heads-up to a silhouetted tank that they’re staying. The Titans seem blissfully unaware that there are limits to their freedom. There’s also a reminder to not chew gum in the theater.

The movie itself is just a mess. It can’t seem to decide if it’s tongue in cheek or very disturbing. Incest, Nazi paraphernalia, and human skin lamps are mixed with a fourth wall-breaking wink and freeze frame to end the film.

Several siblings and servants gather to mourn the passing of John Carradine’s Christopher Dean, who provides the only real star power of the film and who is also off screen for most of it. One by one, they’re picked off in gruesome and improbable ways (Bees! BEEEEES!).

As an Iowan, I have to appreciate Trace making a Kum & Go reference early on.

Mary Jo has some great riffs near the start of the film, commenting on the requirement that the children spend the night in the haunted mansion before receiving their inheritance “Dad was watching a lot of Scooby Doo before he died.” Plus, following an unlikeable character saying “Every dog has its day,” Mary Jo follows it up with “And every door has its knob.”

We’ve got movie break: About 21 minutes in, the film stops while troops barge in. It turns out Frank was chewing gum.

Speaking of Frank, he comes up with a great, ego-free name in the spirit of Big McLargeHuge: “Doctor SuperPenis.” Feel free to use that for your dating profile name, fellas.

Trace comes up with is probably my favorite riff of the film in a scene where Igor (Buck Kartalian) is topless and surprisingly muscular: “Body by Charles Atlas, head by Mel Brooks.”

We’ve got movie break: 45 minutes in, Trace pauses the film for the game show “Which Thing Won’t Kill You,” where Josh has to choose between a lamp with a frayed cord over a puddle, a possibly empty suit of armor holding an axe and a KISS pinball machine. Josh is excited to play, despite the fact that two-thirds of the items will kill him, saying he’s willing to risk it because the movie is so bad. Frank pipes in with a great MST3K reference: “It’s been my experience you can die and still come back in the next episode.”

Then timely reference: Trace says “That robe would make Hannah Montana look old.” Miley Cyrus was about 15 at the time.

Trace also gets the best riff on a room full of Nazi paraphernalia: “Lamp by Eichmann-KEA.” The delivery really sells it.

Bonus feature: Still no extras on the movie itself, but this film came with an autographed J. Elvis Weinstein photo.

Actress Merry Anders was also in “Women of the Prehistoric Planet” and “The Time Travelers.”

Actor John Carradine was also in the MST3K episodes “Red Zone Cuba” and “The Unearthly” and the Rifftrax releases “Voodoo Man,” “Frankenstein Island” and “Hillbillys in a Haunted House.”

Actress Faith Domergue was also in “This Island Earth,” which was riffed in “Mystery Science Theater 3000: The Movie.”

Actor Buck Kartalian was in “Gymkata,” which hasn’t been riffed, but it did provide a long-running catchphrase for MST3K. Frank and Trace did discuss the movie on their Movie Sign with the Mads podcast.

Actor Jeff Morrow was in “This Island Earth.”

Actor John Russell was in the MST3K episode  “Untamed Youth.”

Actor Roy Engel was in the MST3K episode “The Indestructible Man,” The Film Crew release “Killers From Space” and the Rifftrax riffed film “Kingdom of the Spiders”