I’ll start this off with a warning that there are major spoilers for “Star Wars: The Last Jedi” below. The film has been out for two weeks at this point, so I don’t feel bad about spoilers, but I will give a little space for those who want to avoid them.

Judging by reactions online, it seems fair to say “The Last Jedi” is the most divisive Star Wars film. I’d say it deserves that title over any of the prequel films because everyone seems to have the same opinion on those, so there’s no real division. You even see it reflected on Rotten Tomatoes, where “The Last Jedi” has a 91% rating from critics, but a 52% rating from the audience.

For the record, I liked “The Last Jedi.” I’d put it in my top four Star Wars films, trading places for third with “The Force Awakens,” depending on my mood on any given day.

What will probably boost it above “The Force Awakens” for me is that it subverts the expectations of the last film, as well as the model set by “Empire Strikes Back.” Kylo Ren’s “Let the past die” is probably the best ethos the Star Wars films should have going forward. They need to be able to move beyond the Skywalker bloodline to make the franchise sustainable and to keep the storytelling from being predictable.

Which brings us to Rey. One of the mystery boxes JJ Abrams stuck into “The Force Awakens” was Rey’s past. Was she some lost Skywalker relative? Obi-Wan’s daughter/granddaughter? No, we find out she was no one special and her parents were no one special. Please, JJ Abrams, let that stick. Don’t have Luke’s ghost return in the third film to draw a needless bucket of historical importance from the Well Actually.

Because rather than the resistance reforming from the examples of the few brave survivors of “The Last Jedi,” it needs to come from characters like Rey. Characters who start a hero’s journey not because they were born for greatness, but because they strive for it or even just have it thrust upon them. We see that seed planted at the film’s end, with the little stable hand who demonstrates a bit of Jedi ability before displaying the rebel ring Rose gave him.

The specter of failure looms large in “The Last Jedi.” Luke sees failure as the legacy of the Jedi. Poe fails to see that without a plan that the resistance can win a battle but lose the war. Kylo Ren believes all his masters have failed him, and that his caring for his parents was a weakness to be destroyed (while simultaneously reaching out to Rey for a partnership). But as Yoda tells Luke, “The greatest teacher, failure is.” Director Rian Johnson set the stage for some natural character progression from painful moments. Let’s hope that isn’t ignored in the next film.

Because it’s only natural to compare “The Last Jedi” and “Empire,” I had to go back and look at the end of the second film. After the success of “Star Wars,” “Empire” was seen at the time as a downer, and the cliffhanger ending was relatively new for blockbuster films at the time. Luke lost his hand, found out his greatest enemy was his father, Han was sealed away in carbonite and things looked really dark. But think back to the last shot of “Empire.” Luke has his new hand, he’s with Leia and they’re amidst a fleet of rebel ships, which seems like a real show of strength. There were personal losses at the end of “Empire,” but the rebellion was probably stronger than it was at the end of “Star Wars.”

At the end of “The Last Jedi,” the entire rebellion seems to fit on the Millennium Falcon. There’s not much to feel hopeful about for them. Add to that the fact that we know General Leia is unlikely to play a part in the next film and things look very dark. It gives the same “Whoa, where do things go from here?” as the end of “Empire did, but without the sense of hope. It’s like if George RR Martin wrote a Star Wars film.

The Kylo/Rey battle against Snoke’s guards is maybe the coolest thing in any Star Wars film. It provided a great moment where it seemed Kylo had turned to the light side, only to find out he had other plans. It reminded me of this Simpsons moment: 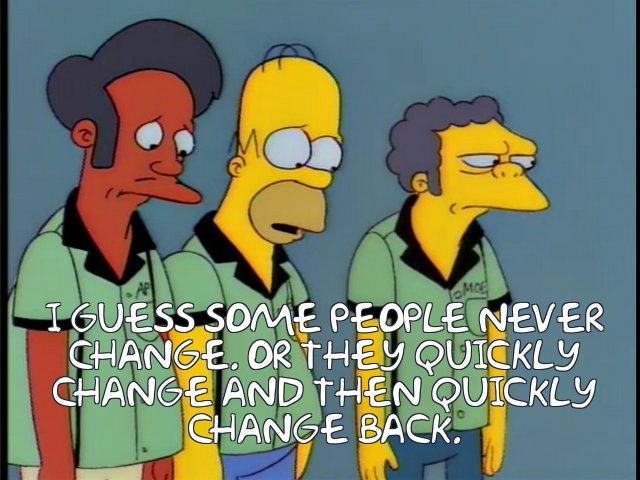 Speaking of comedy, finally we got a Star Wars film where the titular (and title) line was used in the film!

Kylo’s conversation with Rey about her past was basically “Your parents were nobodies and so are you. Want to hang out after this?” showed negging was strong a long time ago in a galaxy far, far away. Was Snoke just instructing Kyle in the ways of a pick-up artist?

I enjoyed the more concrete timeline that “The Last Jedi” had. In “Empire,” time gets a bit nebulous when it comes to how long Luke was training vs. how long Han and Leia were in Cloud City. With this film it’s very clear that everything takes place over a few days, thanks to the ticking clock of the rebels’ fuel supply.

I think there was some great chemistry between Oscar Isaac and Laura Dern. If he’s playing Gomez Addams in the new Addams Family, can I suggest Dern for Morticia? I want to see that chemistry fulfilled, plus I liked that they didn’t try to disguise that Dern is taller than Isaac (like Morticia should be with Gomez). She seemed to tower over him in the film, which altered the power dynamic.

Speaking of which, by about the fifth time a female character spoke all I could think was “So many childhoods must be ruined by this.” Sorry, man-babies.

I loved that Luke wasn’t filling the Obi-Wan role, but the Yoda role. Of course that makes sense, since Han was essentially Obi-Wan in “The Force Awakens.” Like Yoda, Luke ended up being not at all what the Jedi-in-training expected. And seeing him in action at full Jedi strength exceeded my expectations (Yoda vs. Dooku was the sole bright spot of “Attack of the Clones”).

Try to ever get the image of Luke milking that thing out of your head. Or his gross way of drinking. His beard must smell so bad.

I feel like the third film might have been a bit more Leia-centric, since the first had Han at its center and the second had Luke. But at least Leia and Chewey got their hug in this one.