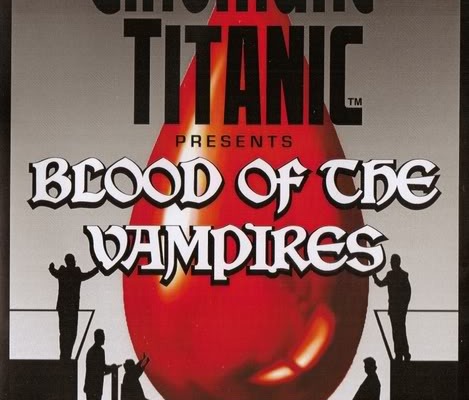 I feel like this is the release where things really started clicking for the group, but that is probably colored by the wonderful experience I had at the live show.

The experiment opens with the Titans entering from the left side of the screen, with the guide (portrayed by Dave “Gruber” Allen) explaining that a data spill in sector four came from a leak in the Copolla tank and all three Godfather films have mixed together. Frank is upset to learn there are good movies here, too. The lack of lotion in this base is also starting to destroy Mary Jo’s mind.

Unfortunately, that’s the end of the story elements for Cinematic Titanic. What was going on in this remote base? Why were the Titans riffing films? That’s all abandoned when the group switches to live releases. More on that in a future release as well.

The DVD started with a fairly desperate-sounding plea:

“ATTENTION. Cinematic Titanic is a self-funded venture. It is owned and produced by us, the people you are about to see. IT is only through the sale of our episodes that we survive as a company to make more of them.  If you are watching this episode via an unauthorized download or other pirated form, you are making a choice that undermines the very existence of Cinematic Titanic. Wouldn’t you rather help create than destroy?”

The film riffed here is “Blood of the Vampires,” also released as “Curse of the Vampires” and the infinitely more lame “Whisper to the Wind.” It was made in the Philipines, set in Mexico and features an uncomfortable amount of blackface. I’ll run some of their better riffs related to that further down in the review.

We’ve got movie break: At 37 minutes in, Josh freezes the film to pass out shots. Frank says he’s breaking 22 years of sobriety, then gets a call from his sponsor, Steve, whom he tells it was only apple juice. Frank then freaks out, wondering how Steve saw him.

Obscure reference: The credit sequence features a frozen image of actress Mary Walter as a vampire. Mary Jo: “It’s Martha Raye the night she married Mark Harris.” An actress and comedian, Raye was in her 70s when she married her 7th husband, 33 years her junior. It wasn’t the only May-December romance riff in the film, with Frank later saying “The wedding of Liza Minnelli and David Guest wasn’t as unholy as this.”

Then timely reference: At one point Mary Jo says “We’ll Twitter him.” This was 2009 when Twitter was just starting to enter the mainstream. I’ll just assume no one was using Twitter yet to know that “We’ll tweet at him” would be the correct usage.

MST3K reference: During a crowd scene, Frank says “Hats from the Torgo collection,” referencing the character from “Manos: The Hands of Fate.” If I’m remembering correctly, this was followed by a comment about fan service or pandering in the live show.

So much blackface: Here’s my run-through some of my favorite parts where they called out the use of blackface in the film.

Frank: “What the hell is Ted Danson doing back there?” (If you don’t remember Ted Danson’s use of blackface at a 1993 Friar’s Club roast, Roger Ebert called it “The worst trainwreck since ‘The Fugitive.'”)

Joel: “I have to be careful not to sweat off my ethnicity.”

Favorite line: Josh’s “I’m not sure how you spice things up a few years down the line when you start things off with a master/slave blood covenant.”

Bonus feature: This is the first disc to include an actual extra, which is just the trailers for the first six Cinematic Titanic features. But I’ll include my getting to meet the entire cast at the Minneapolis show as a bonus feature. After the film they set up a table to meet fans and sign autographs for basically everyone. I got my MST3K “Amazing Colossal Episode Guide” signed by the entire cast (the Rifftrax crew had already signed it, and I’ve since gotten Baron Vaughn and Har Mar Superstar to sign it as well). Joel also took my hand and gave me a very sincere-sounding “Thank you for coming.”

Frank and Trace carry on this tradition after their The Mads live shows.

There weren’t a lot of connections to the Filipino film community in MST3K-connected projects.