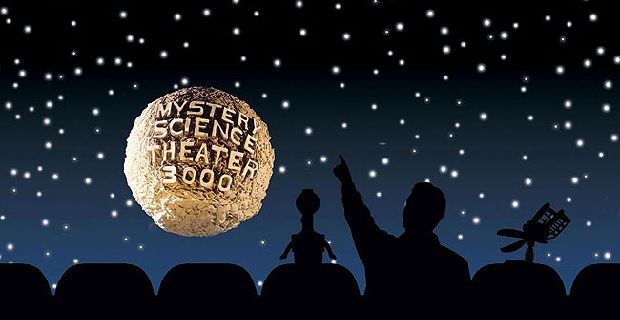 The two biggest influences on my sense of humor have probably been “The Simpsons” and “Mystery Science Theater 3000.” About 90 percent of my references are from the former, but if you hear me say something that sounds less familiar, it’s likely from the latter.

I’m can’t remember if my first exposure to the “Cowtown puppet show” came from my dad (who regularly taped the show) or from the 2 a.m. reruns that WHO TV 13 would air on Saturday nights. In the long, long ago of the mid-90s, Des Moines didn’t get Comedy Central, but the creators of MST3K put together syndication package of episodes and offered them up to local markets. Luckily, Des Moines was one of the takers.

I didn’t realize it at the time, but Des Moines has some tangential ties to MST3K. The city would get occasional mentions on the show, but given the fact that it was based out of the Twin Cities, proximity no doubt played some small part in that.

Creator Joel Hodgson was also good friends Des Moines natives David Anthony Higgins and Steve Higgins and helped create and wrote for The Comedy Channel (precursor to Comedy Central) show “The Higgins Boys and Gruber.” You might recognize David Higgins from “Malcolm in the Middle” and “Ellen” and Steve Higgins as the announcer on “The Tonight Show.”

David Higgins and I both had cameos in the film “The State of Bacon” and I’m not going to lie, the fact that that I’m now two degrees removed from MST3K (and three from Kevin Bacon), is kind of exciting.

I started watching MST3K a few years after my first exposure to riffing, the interspersed videos on “Beavis & Butthead.” Those were funny, but also felt like a way to limit the new animation required for each episode. With MST3K, I was hooked right away thanks to jokes that tapped into my own pop culture interests, particularly comic books, science fiction and the occasional political reference.

While visiting the college I ended up attending, I saw a flyer up for a “Mystery Science Theater 3000” style show, produced by the campus TV station. I’m not going to say that was what sealed the deal, but it didn’t hurt. Sadly, when I got there in the fall I found out that the show had never gotten off the ground. The creator’s concept was to make fun of other shows on the campus station, which didn’t go over particularly well with the people creating those shows. It’s one thing to make fun of forgotten flicks from the 50’s and 60’s, it’s another thing to trash the work of people you share a dorm with.

For the record, an episode of MST3K would fall flat if every joke was of the “This sucks” variety. While mocking sub-par work was often a part of the series, when the series truly soared was when the jokes were more transformative or pointing out the absurdity of a scene or situation. That, or shoving in a bunch of “Lord of The Rings” jokes a decade before the general public would get them thanks to blockbuster film adaptations.

Who got those jokes? The right people. “The right people will get it” is a line associated with the show, said by Hodgson that rings so true. It worked for me because I was a pop culture sponge who would revel in a joke or reference that wasn’t spelled out or explained to me. At the same time, there would be references on the show that wouldn’t pay off until I read a book or watched a film years later. It was always worth the wait.

While my dreams of writing for that college show never panned out, I did get a chance to write for a “MST3K”-type group. Riff Raff Theater was based out of Iowa City and performed several times at the Englert Theater in Iowa City. Studio versions of several of their shows are available on Rifftrax.com.

If I’m remembering right, I contributed to the “Die Hard,” “Minority Report,” Tron” and “Alien vs. Predator” scripts. In the age of streaming, the idea of syncing up an MP3 and a DVD at the same time seems a little clunky, but I promise it’s more exciting than a weekend with Batman (Simpsons reference. Nailed it).

Why do I mention all this now? The aforementioned Rifftrax site is run by former MST3K cast members Mike Nelson, Kevin Murphy and Bill Corbett, who continue riffing on movies to this day. On Oct. 1 they will be riffing “Miami Connection,” which will be broadcast live at theaters across the country, including Jordan Creek’s Century 20 in West Des Moines (it will also be rebroadcast Oct. 6).

Rifftrax has hundreds of MP3 commentaries on blockbuster films, but that also involves syncing up an MP3 with a DVD or streaming movie. They also have many classic streaming films available on the site, as well as on Hulu. Shout Factory and Netflix are also home to many streaming episodes of MST3K. And for some added fun, MST3K’s Youtube page has several annotated episodes of the show, explaining any jokes that might have gone over your head.

Apologies for the lengthy, non-music post. I’ll do something music related again soon, I promise. Until then, keep circulating the tapes.