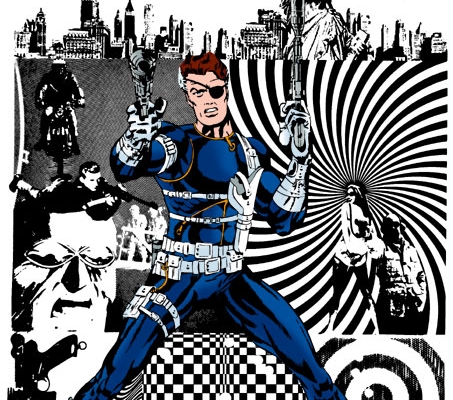 This weekend Jim Steranko will be the guest of honor at the first Midwest Comic Con, which is a continuation of the former Comic Book I-Con. Steranko is arguably the biggest comic name the Iowa Comic Book Club has ever brought to town. He’s without a doubt the most interesting.

Sure, there’s his art, a fusion of Jack Kirby’s energy and Will Eisner’s eye for page layout that spawned generations of imitators from a relatively small number of published works. His most notable work was the revamped Nick Fury: Agent of S.H.I.E.L.D., which transformed the WWII character into a mashup of the best elements of 1960’s James Bond and the Marvel Universe.

But Steranko is so much more than his comic work.

He’s a trained illusionist and escape artist. The Jack Kirby character Mister Miracle was inspired by Steranko’s early career. His father was a magician and he spent his summers working in carnivals as a fire-eater, competing on gymnastics teams, boxing and fencing. If it wasn’t for the fact that he was busted for burglaries and car thefts as a teen, I could almost buy Steranko being the inspiration for Batman.

Holy shit, his Twitter you guys. Speaking of Batman, Steranko had an awesome of series of tweets detailing the time he bitch-slapped Batman co-creator Bob Kane. If you aren’t following him on Twitter, do it now. You need to read the whole thing for context, but if you’ve ever heard the name “Bill Finger,” you already know that slap was deserved.

He’s the Ralph McQuarrie of Indiana Jones. McQuarrie was the production illustrator for Star Wars, setting the tone for the series with iconic imagery. Steranko was the man with that job on “Raiders of the Lost Ark,” helping to establish the look of one of film’s defining characters.

I met him once, and he was awesome. I went to the San Diego Comic Con from 2005 to 2007. I believe it was my first year when I met Steranko. I had brought my “Nick Fury: Agent of S.H.I.E.L.D” TPB to be signed by the master. I saw him standing alone as his booth and approached. He took my book in his hands and… didn’t sign it.

Because the book had been printed in Europe and as a result, he didn’t get any royalties from it. He was very apologetic, but we ended up having a fairly long conversation about international rights of work-for-hire projects. He said he was sorry he couldn’t sign it, but I was thrilled to have chatted with him for so long. I didn’t have anything else for him to sign, so I walked away with nothing but the memory. The next day it occurred to me that I could have had him sign the sketchbook I was carrying with me. I’ve never asked for just an autograph in it, but that’s what I plan to do at this weekend’s convention.