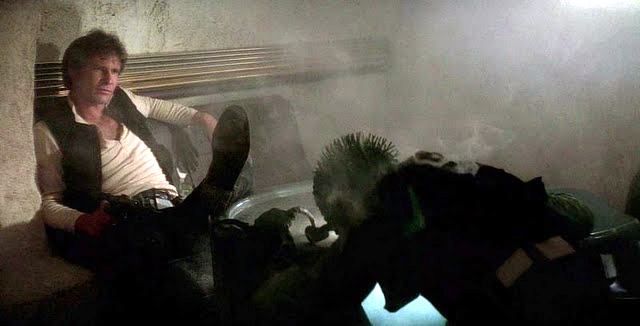 So what, exactly was wrong with the Star Wars prequels? That’s a difficult question to answer, because you could pull at a million little Jar Jar or “Padme making a huge impression on Leia in 30 seconds of parenthood” threads until you’ve turned into a living, breathing message board post.

There’s a lot wrong with those films, but there’s one key missing element: Han Solo. You can find analogs of most of the characters in the original trilogy: Qui-Gon = Obi-Wan, young Obi-Wan/Anakin = Luke, Padme = Leia. You could even make an argument for Jar Jar being a nightmarish version of Chewbacca.  But the prequels were missing a version of Han. And it really showed.

The original trilogy would  have been hugely hurt without Han Solo. A huge portion of that is down to Harrison Ford’s performance, but that character himself was such an essential part of what made the films work.

But then I started thinking about some of the biggest influences on George Lucas, like the films of Akira Kurosawa. Large chunks of “Star Wars” is ripped right from “The Hidden Fortress,” just like “A Fistful of Dollars” was whole cloth lifted from “Yojimbo.” Some of the biggest moments in American cinema come from Japanese samurai films.

And Lucas clearly wanted to recognize that samurai influence the prequels. Look at the way Qui-Gon and Obi-Wan carried themselves in “The Phantom Menace.” Notice the way they draw their lightsabers from under their robes and tuck them away the second the action is over. They’re samurai, no doubt.

The problem is, samurai are a lot less interesting than ronin, masterless samurai. That’s what Obi-Wan is when we meet him in “Star Wars” (even if we do meet his master, Yoda, in “Empire”). That’s what Toshiro Mifune’s Sanjuro was in “Yojimbo,” that’s what all the samurai in “Seven Samurai” were (save Mifune’s Kikuchiyo).

And that’s what Han Solo was. I’m not going to dig into his history in the books, but just from the context of the films, Han Solo fits the ronin mold. We see in the first film that Luke is willing to join the empire to be a pilot, because that’s the way things work in this world (at least until you find out about the rebellion). Clearly Han had some military experience to get the flight skill she had. Then he was cast out (or walked away), selling his blaster and ship to whoever had the credits to pay for it.

And there was none of that in the prequels. Nothing for us to relate to. Maybe the love story between Anakin and Padme could have filled that role with better acting, better writing and a director who was interested in guiding performances, but we didn’t get that.

I’m keeping this post spoiler free for “The Force Awakens,” other than to say the film is very Han Solo-centric. And not just because Harrison Ford is back. Finn, Rey and Poe easily could have been 1:1 versions of Han, Luke and Leia, but instead each has elements of the big three heroes. It’s a smart move, and gives us a bit of Han with each protagonist.

Over six years, George Lucas ground down my interest in “Star Wars” with  the prequels, while at the same time Peter Jackson was winning me over with the more lived-in feeling world of “The Lord of the Rings.” A decade later, a bloated and overly digital prequel series by Jackson has soured me a bit on LOTR, just as “Star Wars” is starting to feel right again.