There was a parenting moment I knew would happen eventually, but I foolishly hoped might bypass my family: an emergency room visit.

My parents knew it well. I had seizures as a kid. My brother fell through a plate glass table top (one among many child/adulthood injuries). My sister got her pinky slammed in a door, losing the tip of her finger.

But for the first four and a half years of parenthood, urgent care walk-in clinics were as severe as things got with my two kids. Then my daughter got crazy eyes.

At first, we thought it was pink eye. Our 18-month-old son had brought it home from school and graced us all with its warmth, like the eye of Sauron seeking out its next victim. Our four-year-old daughter got it early, then last week seemed to be getting it again.

On Friday her eyes looked really pink. By Sunday, it looked like she had been in a boxing match with the toughest toddler in town. Her left eye was swollen shut. The urgent care doctor told me she didn’t have the proper equipment to examine the eye. Who did?

The emergency room. My Cal Ripken-like streak of child shielding was about to come to an end.

I left the walk-in, headed for a nearby hospital. From the backseat, my daughter started to inquire about the pancakes “with a sidekick order of hashbrowns” that had been promised if she was good for the doctor. I realized I hadn’t eaten any breakfast yet (she had already eaten toast and yogurt). It was going to be a hungry morning.

It didn’t take long for us to get in front of a doctor at the ER, where every parent hopes for a reassuring “We see this all the time, this magic wand will solve the problem.” Instead, we got tests. And scans. And an IV catheter/splint that caused a lot of tears.

My daughter is four, but people regularly mistake her for older. She’s really mature for a four-year-old, which made it easy to forget that she had never been through an experience like this before. Suddenly every doctor and nurse came with the possibility of shining bright lights in her pained eyes, hooking up new medication or messing with her IV. Even taking her temperature or listening to her heart made tears start to flow.

The diagnosis: preseptal cellulitis. She was going to have to stay at least overnight at the hospital (it ended up being three nights). Below is an image of Teddy from Bob’s Burgers that isn’t too far off from how her eyes looked. If you want to have nightmares, do an image search on the condition. 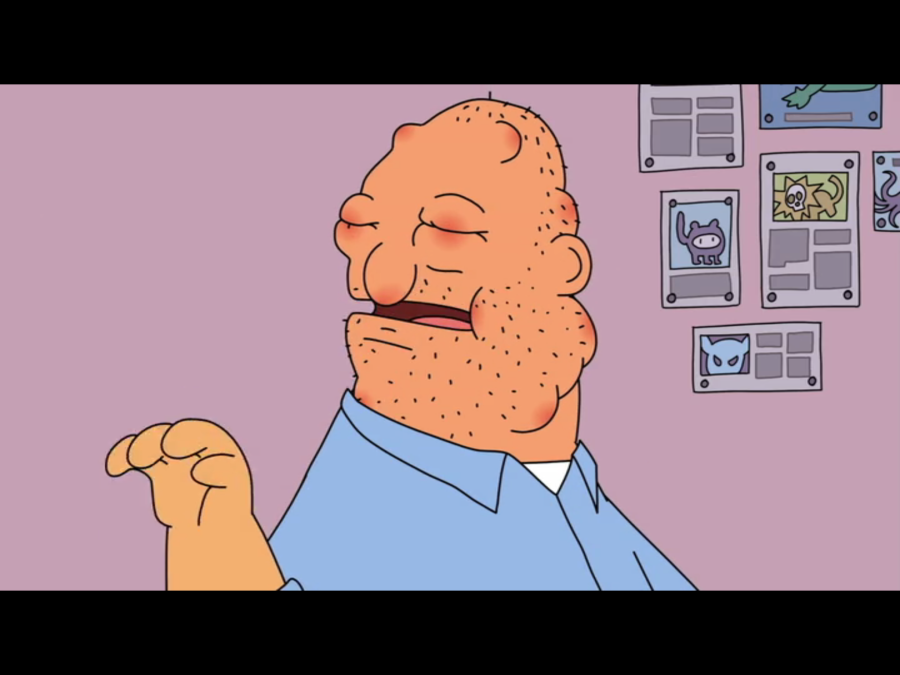 Because I was laid off from my job last week, I volunteered to stay overnight at the hospital, while my wife took our toddler son home to sleep.

My daughter and I get along. We share space at home. We enjoy many of the same things. The hospital has wi-fi. This will be easy, I thought to myself, not considering that we normally have a large, two-story house, rather than a single room. That our time together is split up by things like daycare and episodes of “Jake and the Neverland Pirates,” watched in another room with the sound blocked by thick doors.

I also didn’t consider that four days of room service would turn my daughter into a tiny diva. Basically, four-year-olds make for horrible roommates.

You may not realize this, but an otherwise reasonable child can become spoiled very quickly. The hospital offered pretty much any food a child would want. So pizza AND French fries AND chocolate milk AND cake were an option for any lunch or dinner. There was also a fridge we had access to that was stocked with juice, chocolate milk and ice cream.

There may have been more than one crying “I want ice cream!” fit.

The fridge did have one odd restriction. NO TURKEYS! 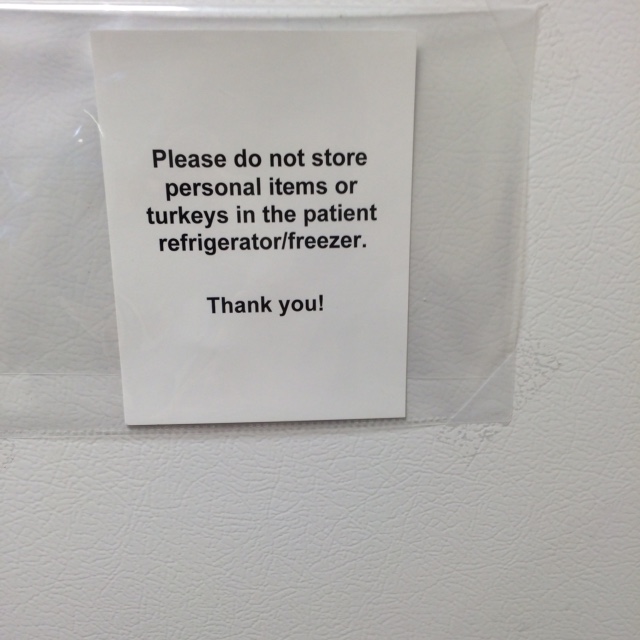 There was also a binder full of DVDs. It included options you would expect, like most Disney movies, including some oddities, like “Karate Kid II.” Not part one, not three, not the Hillary Swank movie and not the remake. Just “Karate Kid II.”

It was checked out the entire time we were in the hospital. They also had “Bowling for Columbine” on the list of PG-13 films available. I’m pretty sure I was the only teenager I knew who watched Michael Moore films, but it’s nice to know the older kids had options other than superhero films.

We watched “Snow White” more times than I care to remember. Ava also got spoiled with these options, as well as having access to cable. One night she became a crying mess because she wanted to watch “Sofia the First” on TV, NOT ON DVD! Of course, it wasn’t currently on TV, and my offers of going to get it from the binder were not well received.

So I put on my headphones and waited for the wailing to die down. Eventually she decided that a DVD was an acceptable way to watch Sofia.

She also wanted to make sure I told her teacher at daycare that the hospital was now her permanent residence.

Ava: Can you tell Ms Erin I live in the hospital now?

Me: You don’t live here, we’re just staying here for a few days.

Ava (crying): You said that!

Me: I think that might have been a dream.

It felt heartbreaking, in part because I couldn’t tell if she was resigned to living in the hospital, or excited about it.

Our floor had an awesome playroom, full of toys ranging from blocks to Xbox 360s. There were also coloring books, like a gem that covered the Star Wars films from “A New Hope” to “The Phantom Menace.”

If the book had come out in 2000, it might be understandable, but it came out after Disney purchased Lucasfilm. So after coloring the most exciting moments of the original trilogy, kids can cool down with classic scenes like this:

After four days, we got the clearance to go home. We would get to sleep in our own beds, have dinner as a family, see the dog and in Ava’s case, regain full use of a previously IV-hampered left arm.

Despite making for a sometimes frustrating roommate, I’m amazed how well my daughter handled this stressful situation. I think she might be a little more distrustful of doctors, with their constant demands that she accept antibiotics and allow them to look at her eyes, but overall she was incredibly brave.

I just don’t want to do it again. Apologies to my son, but I’ve used up my patience for staying in the hospital. He needs to have a super immune system.

2 thoughts on “Four-year-olds are the worst roommates”