This week is the seventh wedding anniversary for me and my wife. That’s a pretty good number, but 2016 also marks 20 years since we started dating. I’m going to focus on that one for a bit.

Just to be clear, we haven’t been dating for 20 years. Even though I married my high school sweetheart, I don’t think our relationship would be as strong as it is now if we had married the first person we fell in love with. 1996 was the summer before my senior year, and I would have gone off to college in Florida while she stayed in high school in Iowa. Long distance relationships are a pain, and we were kids. I think things worked out much better the way they did.

In May of 1996, I went to a party at Berkleigh’s house. It was billed as a 12-hour party, and I remember that there were movies show (I believe Hamburger Hill was one of them), swimming and a drag queen contest.

I finished third in that contest, thanks to my long, luxurious hair and a nightgown borrowed from Berkleigh’s mother. I still think my third place finish was kind of BS. I didn’t expect to get first, because the winner, Tom, was constantly being mistaken for a girl on a normal day, so with makeup and a dress, the illusion was pretty complete. But there’s no way the second place finisher, David, should have beat me. I still suspect jury tampering.

We were part of a circle of friends who hung out at a house on Cottage Grove. We were a fusion of the weird kids, the artistic kids, the theater kids and the just plain nerdy kids from Roosevelt. The core of our group was three siblings. The eldest sister was my age, the middle brother was two years younger and my best friend. The younger sister was Berkleigh’s age.

I guess all that is still accurate. But I’m telling a story set in the past, so I’m using past tense.

As a result of the siblings being the center of our group, the ages and genders of our group were all over the place. On an average summer day, there were 20 or more kids through that house. I know it made life hell at times for the siblings. I’m sorry about that, but thank you for giving me a place to meet my future wife.

That summer, the siblings and a good number of other kids from our social circle were going on a church trip to England. With the core gone for a few weeks, the dynamic shifted. People still came to hang out at the house, but they started interacting more with different people in this vacuum.

I started hanging out with Berkleigh more.

Though “hanging out” doesn’t mean much when you’re doing it with a group of a dozen or so kids. We would walk to Tait’s to buy lemonade and pass the time. I had recently been dumped, and for some reason I was spilling all my angst about that to Berkleigh. I remember her being very supportive and saying things like “I’m sorry you’re going through this” a lot. Because I was getting attention for this cute girl, I kept talking about my pain, even though I probably should have shut up and asked Berkleigh questions about herself.

She was like Claire Danes from ‘My So-Called Life,” perfectly 90s in the way so much of the 90s seemed just slightly out of time. And she would regularly dye her hair, which just enhances the dream-like quality of that summer. She wouldn’t pick anything too outrageous, just a shade that would lend itself to the slight distortion of reality in my memory. 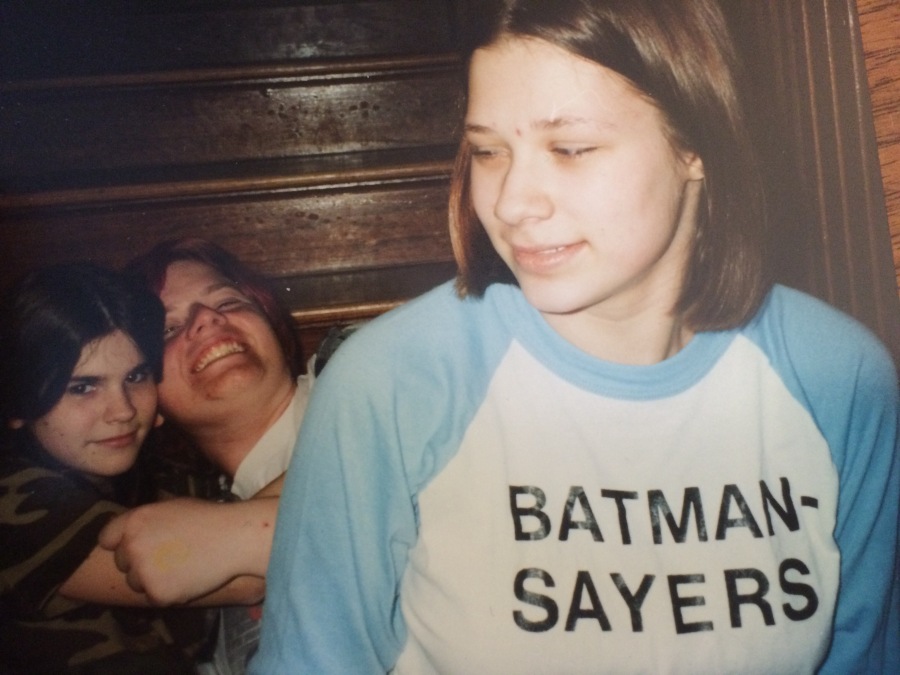 And if you think there is a “manic pixie dream girl” quality to this, I’ll just stop you right now. Please light yourself on fire and never combine those words in that order again. She was effortlessly cool, in a way that she didn’t realize, but people still bring it up to this day. She was a real person, not some character dreamed up to further a plot.

In my head, I remembered a photo of us from one of those walks to Tait’s. I think I was leaning against a pillar, looking 90s cool, and she was looking off into the distance. It was like the most awesome album cover ever… in my head. I recently tracked down the photo and realized I’m barely in it, and she’s looking at the ground. I really over-romanticized that picture in my head. Sadly, because everyone in the world didn’t have a camera in their pocket at the time, there aren’t many photos of us together from the 90s. But there’s always this:

The still large group went to movies, like “Mission Impossible,” where Berkleigh and I sat next to each other. Then we went to the Sean Connery-as-a-dragon classic “Dragonheart,” where we sat next to each other, and our hands crept closer and close to each other on the arm rest. Then they touched! We were holding hands! I’ve got to tell my best fri… oh, he’s in England.

Then we went to a party at another friend’s house. We were sitting next to each other as the party was winding down, and then it happened. We kissed! I have to tell Wil… Damn, still in England.

Shortly after that, she went home and I snuck into a graveyard with three other teenage boys because I don’t need to justify that to you. It was Iowa in the mid-90s, what else were we going to do?

Years later, when I proposed to her, I did it at that house. It’s now a tea salon. It was pouring rain, she was sick and I didn’t want to tell her where we were going. I probably seemed like a crazy person. “No, I promise this trip is important and worth endangering your health and safety.”

I suppose the majority of our relationship centered around making out, walking to Tait’s, watching TV at our friends’ house and going to movies. Neither of us had email accounts, a cell phone or AIM (remember that?), so we would each just show up at the house every day, hoping to see each other there. Every time the door would open, my heart would flutter, then I would look and it would be someone like Chuck. Damnit, Chuck! Why couldn’t you be Berkleigh?

The AV Club recently did a good look back at 1996. One of the articles was on the four best TV show to movie adaptations of 1996 (kids, big screen adaptations of TV shows were the superhero movies of the 90s). That was a fun trip down memory lane, since Berkleigh and I saw three of those movies in theaters together. Sorry, “Beavis & Butthead Do America,” our relationship was over by the time you came out.

I remember that our summer together was broken up by some family trips. I went to Florida with my mom and to the Rock & Roll Hall of Fame with my dad. She went to Michigan with her parents. She brought me back an arrowhead necklace, I bought her some lame manatee earrings. Our relationship at the time probably totaled 12 weeks, which included those three weeks apart, but it still felt like forever.

Until it didn’t. We broke up around the time of the Iowa State Fair, shortly before Berkleigh’s birthday. I don’t think I’ve ever gotten a really clear answer on why it ended. On her birthday that year, I asked her if she had had a good birthday. She told me to leave her alone. That was the last time we really talked to each other for around two years.

I consoled myself by listening to Leonard Cohen’s greatest hits and the “I Shot Andy Warhol” soundtrack. Deep cut, there. John Cale wrote that film’s score, and his version of Cohen’s “Hallelujah” was on repeat on my CD player at the time and fuck everyone who has tried to ruin that song over the last 20 years. Stop putting it on the soundtrack of your shitty movie/TV show/commercial/funeral/whatever. That song and all its pain belong to me, because I bought the “I’m Your Fan” tribute album at CD Exchange for the REM cover of “First We Take Manhattan” and fell in love with the rest of the greatness within. I’m sorry it got overplayed, but that’s everyone else’s fault. Don’t blame the song.

Berkleigh recently told me that she spent many nights crying while listening to Bush’s “Glycerine” and a Foo Fighters song she can’t remember the name of. I think I’ve blocked out the radio hits that were probably making me cry at the time. Probably something by The Wallflowers. Clearly 107.5 The Dot was a big influence on us back then.

It would be easy to dwell on what those lost years could have meant for our relationship, but I don’t. Well, it would have been cool to have dated during my senior year, instead of avoiding each other like we did. I went off to college in the fall of 1997, and returned home the next summer. I went to a music festival with my then-girlfriend, and she ran into a slimy friend. He turned to introduce us to his girlfriend, and my jaw hit the dirty ground of the Ankeny Airfield. There was Berkleigh, more beautiful than ever.

I don’t think we said much to each other that day. We would occasionally run into each other at a coffee shop we both hung out at. Here’s where the story peters out for a few years. We would rarely see each other, but every time we did I would fall in love again.